The Fundamental Blindness in a non Euclidian Space 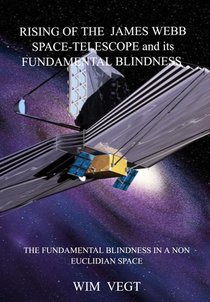 Einstein understood “Quantum Mechanics” and “Quantum Field Theory” better than many modern physicist does, because he understood the Deeper Layers in Physics. The fundamental layer in physics, that probability is not the “Foundation of our Universe”. Albert Einstein was much more like Isaac Newton who saw and understood, 300 years ago, through his tiny little telescope the fundamental foundation of the universe better than most modern physicists do. When modern scientists observe the Universe through their powerful “Hubble Space Telescope” and the coming, thousand times more powerful, “James Webb Space Telescope” they can see far into the beginning of the Universe. But they will not see what Isaac Newton saw 300 years ago. They do not see the “Beauty” and the “Harmony” in the Universe. They do not see the Wonderful Equilibrium which holds the Universe together. They do not see the Love who created the Universe. Looking through their powerful telescopes they are blind and cannot see that the $ 9.7 billion costs of the “James Webb Space Telescope” also could have been used to save millions of people from a starving death.